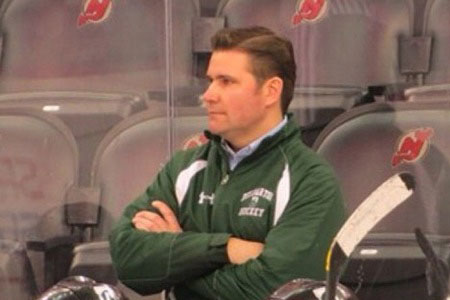 Shatel has taught mathematics at Delbarton School for 23 years. He serves on the Rules Committee and the Seeding Committee for the NJSIAA. Shatel has also been a coach and evaluator for USA hockey for the New England District. He is a certified Level 4 coach for USA hockey. In 2014, Shatel was inducted into the New Jersey Ice Hockey Hall of Fame. In July 2017, the Star Ledger named him as one of the most influential people in New Jersey high school sports. He is the Tier 1 Director of Boys Hockey for the New Jersey Colonials.

Coach Velischek is a graduate of the Delbarton School where his team won 3 NJSIAA State Championships and 3 Gordon Cup Championships. He finished his Delbarton career with 121 points in 94 games. He played college hockey at Providence College in the Hockey East Conference and later played with the Sioux City Musketeers of the USHL. He was drafted by the Pittsburgh Penguins 123rd overall in 2009 NHL Entry Draft and played professionally for 3 seasons in the AHL/ECHL/CHL after completing his NCAA career. He is a top coach for the New Jersey Colonials Tier 1 program.

A 2017 graduate of Princeton, Davis is now the Assistant Coach for the the Tigers. He skated in 97 games as a defenseman and collected 21 points on six goals and 15 assists. An ECAC Hockey All-Academic team selection, Davis was an assistant captain his senior year and graduated with a degree in history. Davis used his fourth year of eligibility at Providence College, skating for the Friars during the 2017-18 season. The runners-up in the Hockey East Championship, Providence reached the NCAA East Regional Final. Davis appeared in all 40 games and had 11 points with one goal and 10 assists and had a +16 on-ice rating. A native of Ho-Ho-Kus, N.J., Davis earned his MBA from Providence in the spring of 2018. A 2012 graduate of Delbarton School, Davis played in 106 games for the Green Wave, scoring 21 goals and 52 assists. Delbarton won the New Jersey state championship all four years, as Davis captured first-team All-Gordon Division, second-team all-state and all-tournament as a junior. He was also team captain his senior year. He spent the 2012-13 season with Youngstown of the USHL. Davis, teaching at Princeton Day School, lives in Princeton with his wife Annabeth and their two daughters Esme and Adeline.

Coach McLaughlin is the Randolph High School Head Coach and 9 time NJ State High School Champion. He was inducted into the New Jersey High School Hockey Hall of Fame in 2012. He coaches club hockey for the Kinnelon Colts.